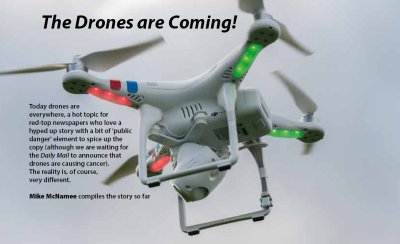 The History and Evolution of the Drone In terms of evolution, depending upon your definition of a 'drone', you can stop off at various points along a time line to decide when they were 'invented'. If the drone is not reusable and does not return to base (as a definition) then you can go back as far as 1849 when the Austrians attacked Venice with bomb-carrying balloons (they did not return to base, although some returned on contrary winds and dropped their payload on to friendly territory!). However, there is a fundamental difference between un-manned munitions which fly to a target and then explode (aka cruise missiles, V2 flying bombs or aerial torpedoes) and what we today call drones. It was radio control which changed the game – remotecontrolled return-to-base became possible, if a little unpredictable.

World War II saw the emergence of the Radio Plane Company which by the end of the war had manufactured 15,000 drones (for anti-aircraft gunnery training). Famously, in 1944, a certain Norma Jane was one of the drone assembly workers, later to become Marilyn Monroe. Early attempts were made at radio-controlled, full-sized aircraft and President Kennedy's bother was killed due to an RC plane malfunction (from which it had been intended that he would parachute to safety).

In 1940 a patent was filed by Edward M Sorenson for a radio-controlled aircraft whose position and flight attitude could be determined from a remote, out-of-sight terminal. Drones had arrived in concept at least!

Progress and the devolving of the technology into public and leisure life was slow from this point. In the early 1960s many radio-controlled model aircraft were being flown by enthusiasts using valve receivers. These were vulnerable to rough landings. Battery technology was also at a relatively undeveloped state and the actuators for moving the control surfaces (eg ailerons, elevators and rudders) were often powered by rubber bands, wound up before each flight. However, Graupner introduced micro electric motors with sufficient power to fly a model aircraft for 23 minutes in 1960 called the Silentius. Soon the expansion of readily available NiCd batteries provided electric, fixed-wing airframes capable of fast climbing. Such was the expense of the batteries that the controlling body (The FAI) limited the total battery power in competitions because they were afraid that youngsters were being forced away from the hobby by the cost. Radio-controlled jet aircraft were regularly flown out of the small RAF Llanbedr airfield near Shell Island in North Wales in the late 70s (above an unconcerned editor and his unborn child!).


There are 255 days to get ready for The Societies of Photographers Convention and Trade Show at The Novotel London West, Hammersmith ...
which starts on Wednesday 15th March 2023