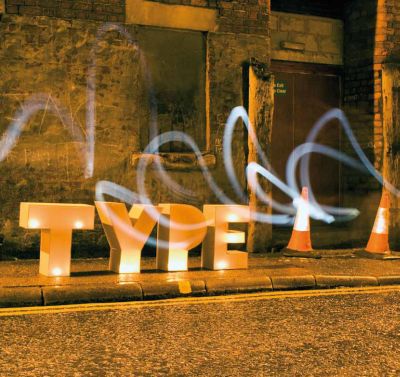 At some stage almost everybody needs to put some text on their images. This can take the very simple form of adding a signature or copyright mark, progressing to a full-blown page of typing such as a promotional flyer. In general, large spreads of text are not normally set in Photoshop, but it can be done at a pinch, especially if you are not inclined to buy and learn In Design or Illustrator. An understanding of the basic typography jargon is helpful and can take you quite a long way, so here is the low-down.

The subject of typography is vast, an ancient art with many archaic terms that have survived since the time of Gutenberg and the first printing of the Bible. The small lead letters were set onto holding plates, spaced by pieces of lead (hence leading, the space between lines of text) and after use were sorted, with capital letters going into the upper drawers of the case (upper case) and the small letters going into the lower drawers of the case (lower case). The word font is French for drawer. An apprentice not working fast enough in sorting the letters back into place would leave his master 'out of sorts'.

The ability to make multiple copies of a piece of writing had a profound influence upon the great unwashed. Previously only the monks and scribes could perform the task and did so at agonisingly slow speed; the population had to make do with the symbolism depicted on stained-glass windows, iconography and statues. The hoi polloi of the time were also terrified that a more learned peasantry would soon be getting ideas above their station, a fear that was, before too long, a stark reality. Eventually the leaflet became one of the stronger propaganda tools at the disposal of those inclined to stir things up a bit. Things have moved on at quite a pace since and we are now about to lose our ability to communicate in English but will have legisl- 8tion for putting road signs in text speak and English. OMG by 2moro it'll b Str8 text speak on the M1. LOL.

ps - I had to get some help with that last bit!

The shape of letters is defined by the font. 'Font' is the name reserved for describing a single collection of letters of the same 'weight' and general design form. The weight describes the thickness of the individual strokes that make up the letter shapes. A collection of fonts of different weights (and perhaps for different languages such as Hebrew or Cyrillic) is called a font family. Thus Myriad Pro is a font family consisting of regular, italic, condensed, semi-bold, bold and black weights. It is a very fulsome family with 20 variants before you throw in the extra variations for Greek, Hebrew. Arabic, and so on. It is typical of a professional font set; most of the fonts devised by amateurs and made freely available on the web only contain a basic, reduced 'se' of glyphs. A glyph is a particular instance within a font such as a letter a. But with a full set there will be almost 50 letter 'a' glyphs alone!

For this reason a font such as Myriad will be chosen for larger projects (such as Professional Imagemaker) safe in the knowledge that we can tackle most requirements that come our way. For example Jorgen Brandt writes for us and it is only courteous to use the correct spelling of Jørgen. Without a fully specified font we would not be able to do so.

The weight variations may be used to bring attention to a particular sentence, word or entry within a table. In a business flyer the weight of font chosen for a particular headline will depend upon how important you wish that headline to be. The converse is also true, hence the warning to look closely at 'the small print' of a document.

This is one of the most common styles for of adding text to an image.

1. Open your image in Photoshop.
2. Expand the canvas, leaving additional space at the bottom.
3. Select the type colour (although it may be changed later), font, font size and set the justification to 'centred'.
4. With the Text Tool, drag a box from one side of the image to the other (or from one border edge to the other. This ensures that the text is centralised).
5. Type your title and, if needed, any sub titles (using hard returns).
6. Adjust your fonts to taste (see image) then the space between the lines (the leading). A fast way to change font size is by highlighting the text then use Ctrl+Shift+ > or < to change the font size two points at a time or Ctrl+Shift+Alt+ > or < to change the size 10 points at a time. To change the leading, the shortcut is to highlight the text then click Alt plus the up and down arrows to change the leading two points at a time.