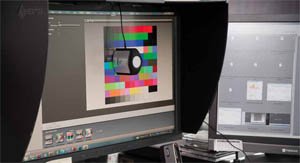 Despite our own addiction to printer profiling we recognise that for some photographers only their monitor needs to be calibrated. This is particularly true if you send work out to be printed. Testing monitor profiles and profiling equipment is fraught with difficulties. When you make a printer profile you then make a print, and that is something that is still on the bench for comparative purposes when you modify the printer profile (and make another print). A monitor display is transient, it only shows while the profile is in use and if you change it you lose the view that you previously had and are left with nothing with which to compare. This would ordinarily not be an issue if it were not for the fact that the monitor and its profiles are essentially inside a black box; you cannot see what is going on inside. Once again with this testing we have been fooled by Windows systems trying to 'look after us'. We made a profile with i1 Display and it became the default monitor system profile. But not for long. The day after (which included a restarting of the machine) the default profile had jumped back to a previous one. This would not be an issue for somebody who owned only one piece of calibration software and the normal advice is to run only one; we were trying to compare one with another!

Testing how good a calibration is working is also fraught. Some systems we have used simply tell fibs, one reports the accuracy as the mathematic precision of the translation to the profile and of course it is excellent; the fact that it bears not the slightest resemblance to what the output looks like seems to have escaped the notice of the software developer! One way to get around these issues is to use totally separate software and hardware to validate the result and this is what we have done here. We used i1Display to build the profile then validated using an i1Pro linked to BabelColor's 'Display Check'. This has the advantage of also generating a Fogra/Ugra certification report against the American GRACol standards as well as testing for compliance with ISO 12646.

This software and hardware are dedicated to screen and projector profiling but seem to use the same interface as i1 Publish. The technology also shares the same spectro as the new X-Rite Colormunki. In practice it was very simple to use; we loaded the software connected the device and we were off. The device itself is a neat puck about the size of a mouse which may be flipped for projector profiling; in use it seemed very much quicker than other spectros especially measuring dark patches. It dangles under its own weight against the surface of the LCD screen. A slightly longer USB cable would have been an advantage -it did not reach from the front of the workstation to the desk-mounted monitor.

We followed the wizard and built a profile using the smaller, 119-patch target. Targets are also available for 220 and 478 patches. The profiles from a reference grade, Eizo CG243W and our rather ancient AG Neovo 419 were compared.

The software includes a validation and error trending facility which is vital for peace of mind. The validation targets are the Classic ColorChecker (24-patch), the IDEAlliance 12467-7 2009 (54-patch), the Ugra/Fogra V3 media wedge (72-patch), the IT8.7-4 CMYK Visual (1617-patch) or the IT8.7-3 CMYK Visual (928-patch). None of these is a particularly high gamut set, that is only obtained from an RGB patch set but they are very relevant if the purpose of the monitor is to proof for ink-on-paper press work. More than a dozen press simulation sets are available (eg the Fogra 39L we use at Professional Imagemaker). Ink-on-paper printing has a smaller gamut over most of the spectrum but tests the ability of the monitor to reproduce the cyans accurately. The Macbeth Color Checker contains some out-of-CMYK-gamut colours, but is still rather unsaturated. Hence, we also validated the monitor against an RGB, 132-patch set using BabelColor software.