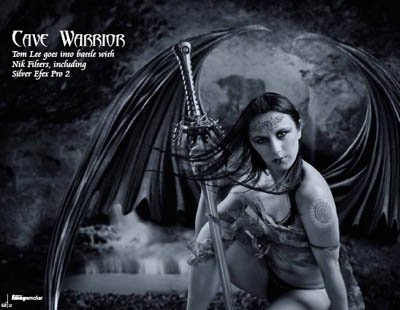 This is the latest version of Silver Efex Pro and it is fully compatible with 64-bit operation. Silver Efex Pro (SEP from now on!) simplifies the conversion from a colour image into monochrome. It relies on an accurately calibrated screen because most of the judgements are subjectively controlled either with pre-sets or by manipulation of sliders. It is also fully compatible with Nik Filters' U-point Technology for finer control of the placement of effects within an image. It was because of the complexity of using the program well that we turned to Tom Lee for our opening image; Tom is a regular and enthusiastic user of SEP. But first let's look at the mechanics of the interface.

The tonal manipulation of an image is divided into five main panels. On the left there are 38 pre-set effects which may be simplified into 'modern', 'classic' or 'vintage' and are typified by contrast variations, colour tone and such vintage effects as Antique Plate. Many users will need to venture no further than this tool set. In theory you should be able to build an SEP filter into an action set - we were unable to do so.

The program took a little short of 10s to process a 30MB, 8-bit RGB file using a standard pre-set.

The first panel on the right is the Global Adjustments which includes Brightness, Contrast and Structure as sliders, along with Shadow and Highlight protection sliders. Structure seeks the edges of objects within an image and protects those edges when increasing the contrast within an object. 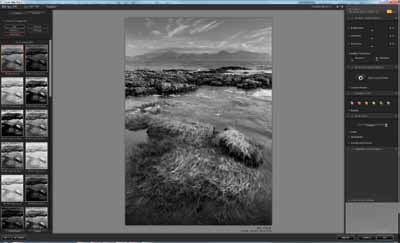 The second panel, Selective Adjustment, allows for the placing of Control Points, using U-Point technology, which applies any tonal changes in a smooth manner. It is a wellregarded technology.

The third panel is for colour filtration which applies the effect of red, orange, yellow, green or blue filters in the oldfashioned (ie monochrome complementary) way. There is an additional slider for the strength and hue of the filter, effectively making it infinitely flexible

The fourth panel is called Film Type and lists 18 possible mimics of silver-gelatine film types including such evocative names as Tri-X and Pan F. This reviewer is a little sceptical about these, as the films were inherently very variable depending upon developer and development conditions. Despite this you seem to get a reasonable mimic of film grain with relative ease. You can even set up your own preferences, spring-boarding off the Levels and Curves dialogue of a given starter pre-set.

The final panel, Finishing Adjustments, provides 25 pre-set tone colours (eg cyanotype, copper, selenium, Ambrotype), however, from within Toning you can also apply a level of control to the hue of the silver and the base-paper tone colour. It's a very subtle refinement. Vignetting and Edge Burning may also be applied and finally there are 14 Edge Borders applying treatments such as key lines, drop shadows and various ragged edge effects.

Overall then, there is a wealth of adjustments to go at and it is not surprising that both beginners and Photoshop experts all seem to like the product - Tom Lee, of course is a real fan, frequently egged on by Podge Kelly, Nik's ambassador in Eire.