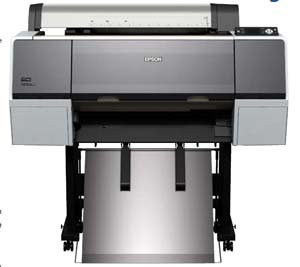 We delivered an initial report on the Epson 7900 printer in the October- November issue of Professional Imagemaker. Since that time we have had the opportunity to test the machine more fully and to perform some serious testing and print-making. We remain impressed - read on!

The 7900 is a very substantial printer. While one of our members managed to get an Epson 7600 up their loft ladder (a feat which still leaves us gasping with admiration!) no such stunts should be attempted with its new cousin. At 80kg the new machine is a four-man lift, especially if you work above the ground floor. The moral is obvious, if you are not having the machine professionally installed, get some strong young rugby players round.

Setting the machine up is similar to all Epsons - good instructions and lots of blue tape to remove. You will need quite a lot of space and may even have to unpack the unit outside the premises, depending on the size of your door; this is particularly so for any photographer who works from home.

The 7900 comes equipped with 110ml 'starter' cartridges for priming the system and you may or may not have to install the spectrophotometer depending which version you have purchased (it can in fact be added as an accessory later, but at slightly higher cost). The cartridge chamber is pressurised behind closed lids and the cartridges are arranged either side of the 24" working throat. 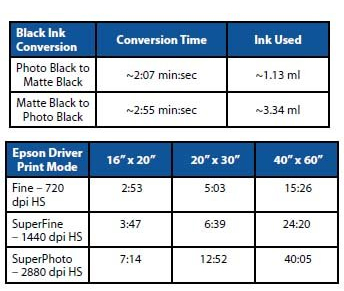 In order to nozzle check the new installation you first have to load paper and right away you will be aware of the new, spindle-less roll handling - more on that later. Our machine (which had travelled from another test) fired a perfect nozzle check first time of asking. Watching the new paper cutter at work for the first time was impressive. The tungsten carbide, roller arrangement flashes across the scene so fast that we kept failing to start the stop watch. The entire arrangement is new.

The cutter has been removed from the ink head. In practice this means that the ink head is parked (and docked) while the cutter whizzes out from lower down to do its work. This has the advantage of protecting the ink heads from any of the dusting that can occur, especially with the cotton rag, fine art papers. Such is the speed of the operation that if the leading edge of the print has to be cut, the actual print process is paused for an instant, the cutter does the business and then the printing carries on. The ability to accurately cut at both the top and the bottom of a print is quite a time saver.

This is one of the major advances brought in with this printer. The High Dynamic Range (HDR) UltraChrome Vivid Magenta inks include the usual suspects, with the addition of both green and orange. So we now have the following line-up, fired through 10 channels of 360 nozzles each.

Note that there are two full black inks, the Matte Black and Photo Black and they are auto-changed, in the same manner as the Epson 3800. The process uses a small amount of ink rather than the rather extravagant waste of the first generation of 24-inch printers (see table).

We found the printing speed to be identical to those claimed in Epson's literature and they are tabled below. For some uses this increase in speed would, on its own, be a reason to upgrade, let alone the improvement in colour performance.