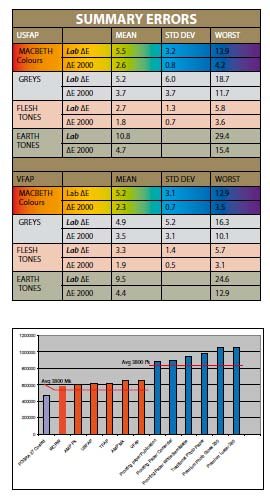 We audited the output from the 7900 using our usual procedure. We examined three papers initially, including the output from a machine based originally at the Epson HQ. These were printed without the use of the on-board spectrophotometer to give us a bench mark. We also had a full range of profiles on which to perform some analysis of the gamut volumes.

Output data from the two separate machines tests using Premium Luster were uncannily similar. So close in fact that we thought we were testing the same machine (we were not, it turned out). The print was perfectly neutral, the greys were mapped right onto the base-paper white-point. The metamerism was very low at 1.0?E Lab (D65 to Illuminant A on 50% grey). The Dmax was 2.32, a high value although not as high as has been claimed (we always measure a little low with our technique). Overall, the prints from both machines were just a little heavy and the prototype profiles might be modified for the production machines. The errors from both machines were 4.55 and 4.58 ?E2000 but in both cases the error in the lightness channel contributed four times the errors of either the saturation or hue channels. If we dialled out the lightness error (mathematically), the overall error dropped to a value of 2.0?E2000.

Across the Macbeth Chart swatch set the audit was 5% too dark.

The blacks were well separated down to 15RGB points, the highlights were differentiated up to 252 points. The Granger Chart was very smooth. Overall it was a very good quality print with the promise of more to come with a little bit of tweaking. The A3 audit print was created in 2m43s.

We made both audit test prints and real fine art prints with this media using the 7900 in the 'as-delivered' state. The prints were noticeably bright and punchy and we were very pleasantly surprised at just how good the audit statistics were. In a nutshell, the audit data from USFAP and the Epson Velvet (tested in the first run) represent the best, 'asreceived' average ever measured for an inkjet printer onto a fine art paper. The only result which splits these two sets was off our own Epson 3800 using Hahnemuhle Bamboo and a Hahnemuhle profile and using Black Point Compensation turned off which resulted in a print with good statistics by a slightly devious route. For the record the base statistics were as follows: The average error across the Macbeth Swatch set was 2.6?E2000.

The residual errors were spread evenly across the lightness, hue and saturation channels. The Dmax was 1.57 and the metamerism slightly high at 2.2 ?E Lab. As is typical with this type of paper and an Ultrachrome ink set, the skin tones were spectacularly accurate, in particular we noted that the saturation of the skin tones was more accurate than normal. The highest error lay in the deep spectral blue. The limiting final density of the matt paper limited the accuracy of the earth tone test set, again normal for this type of surface.

It is in the statistics surrounding the gamut volume measurement that HDR ink set stands out from all its competitors. Put simply, it outperforms everything we have measured previously, on every surface (we looked at 12), with best-in-class metrics all round. As we reported previously the 1 million-mark gamut volume has been exceeded for the first time and we confirmed in this latest test series that this is true for both Premium Lustre and Premium Photo Gloss surfaces.

To a large extent the increase in gamut volume invalidates our previous stance that there is nothing worth worrying about between the sRGB and Adobe RGB as camera shooting colour spaces. The tests using the gamut warning of Photoshop indicate that many 'real' colours lie outside the gamut of sRGB but are inside those of Adobe RGB and the gloss/lustre surfaces with HDR ink. The question then arises does it matter? Well, in a proofing world that is more and more governed by objective measurement of the proofer's test swatch set, it certainly does matter. If an ink set is out of gamut for a particular Pantone colour then it cannot be accurately proofed - if it is now in gamut on HDR it can be accurately proofed, providing care is taken.


Please Note:
There is more than one page for this Article.
You are currently on page 2 Contact Mike McNamee


There are 217 days to get ready for The Societies of Photographers Convention and Trade Show at The Novotel London West, Hammersmith ...
which starts on Wednesday 17th March 2021