The question over which projector to buy continues to arise on a weekly basis. To try to clear the fog a little we decided to compile some basic statistics to assist in the quest! As soon as we started to assemble a database of available projectors, the size of the problem became apparent. Give or take a few dozen, there seems to be a choice of 380 projectors in any of eight resolutions, three distinct technologies and 20 manufacturers. The prices range from a few hundred to more than £23,000 - there is plenty to go at!

DLP has traditionally been sold on its high brightness specification. It has the disadvantage of a greatly reduced colour gamut, poor performance in the yellows and, for some, an annoying flickering as the wheel rotates in front of the light source. At its worst this flickering can cause migraine and certainly does so for your Editor. There is a new ISO measure of quality for projectors which firmly puts DLP in its place. In the two graphs (extracted from the 3LCD paper) data out towards the upper right of the graph are superior and the LCD technology is outstandingly better than DLP. We were unable to duplicate their findings for want of the laboratory equipment, but our measurements of gamut volumes track the published findings closely. The LCoS system is used by the Canon XEED range of projectors and is something of a hybrid which takes the best of both the other technologies. They are popular with camera clubs partly due to Canon's willingness to demonstrate their units at clubs. 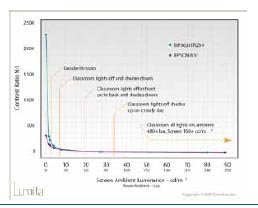 If you read the advertising blurb you could be forgiven for thinking that contrast ratio was an important part of a projector specification. This is a myth, put about by DLP manufacturers as it is one of the sole measurement parameters which is higher than LCD systems! The majority of projection is carried out in less than ideal surroundings. The ideal is total darkness but this is frequently compromised by light leakage around blinds or, in a public place, by the illuminated safety-exit signs. Such apparently trivial sources of light devastate the contrast ratio which you may have just paid a premium for, and are usually outside your control. In the graphs created by Lumita (who are, it should be stressed, an LCD specialist!) the contrast ratio is reported against room illumination, including the source of contaminating light. This shows that the InFocus IN26 suffers a drop from 2300:1 down to 100:1 by the light leaking through blinds (to create a 30 lux ambient light level in the room). For those unfamiliar with what 30 lux is like, think coal-cellar! By this stage the differences between the lower starting LCD technology and DLP are insignificant - it is not worth paying a premium for high contrast ratio unless you can achieve total black-out and are comfortable in doing so. You certainly cannot lecture or present in such a low illumination level as you cannot see either your audience or your notes.