I have to confess to being something of a software junkie and, whenever there is a new release, I look forward to trying it out. Needless to say, when Mike asked me to test the new release of Stitcher (version 2009) I jumped at the chance.

Stitcher is a program for creating panoramas from a series of images stitched together. It was developed by RealViz in France and was taken over by Autodesk in May 2008. At the time Autodesk rationalised the product line to a single version - Stitcher Unlimited, the latest release being Stitcher Unlimited 2009. They also cut the price so that the full product Stitcher Unlimited, containing all features, now retails at £300.

The first thing I wanted to check out was the speed of rendering. Loading an existing panorama project into Stitcher 2009 gave the following results. 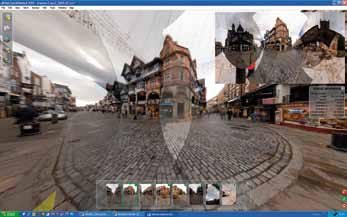 Lens Canon 15mm diagonal fisheye Monopod, 6 shots around plus nadir (straight down) and zenith (straight up) shots. The images were shot in RAW format, adjusted in Lightroom and exported as 1024 pixel-wide JPEG files for the test. Note that this is much smaller than I would usually use in order to speed up the testing; larger files will result in much longer rendering times.