iPad2 for Photographers and Creative Professionals Tablets, Slates - do they have their place? - part 1 of 1 2 3 4 5 6 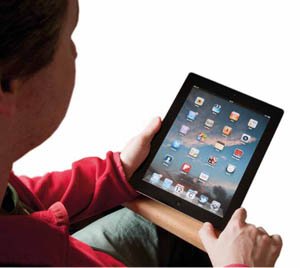 If you're completely new to the "tablet computer" market, in a nutshell, they are a touch screen device without keyboard or mouse, but in some cases, offering similar functionality and power to a low-end laptop. In some cases, even more power - a "netbook" will struggle to play Full-HD video for example, whereas most tablets handle this with ease.

We've had a careful eye on the tablet market over the last six months. Ever since Apple launched the first iPad, other companies have been scrambling over each other to find an "iPad Killer" and, so far, failing.

Buying a first-generation Apple product is for true early adopters only, many will advise you to wait for the second generation device, which has added appeal over the original and some of its issues ironed out.

For review purposes, we are focusing on the iPad2, but the majority of this applies to the original iPad, and also to some of the new tablets coming to the market in the very near future.

We got a new iPad2 "64Gb Wifi+3G". More on the specs later, but this is the top-end model. For the majority of users, the cheaper Wifi-only models with less storage space would fit the bill nicely. Apple offers 16, 32 or 64 GB (Gigabytes) of storage, the 32 GB being the sweet spot for many users.

The battery is as good as they claim. Using the device several hours a day, it comfortably lasts 2-3 days between charges, so the 10-hour battery claim is accurate!

What can it do, what does it replace or do better, and is it worth it?

These questions have to be asked before making any investment, particularly with fast-moving technology. We've approached this from a professional photographer's standpoint, and will try to cover each point from several perspectives.

What can it do?

Truthfully, the majority of things any laptop or netback can do, but in a different form-factor. The lack of a dedicated, hardware keyboard and lack of mouse support at all, means all your interaction is with the screen. For people who insist on physical keyboards for typing, a laptop remains a better buy.

For showing images and video, with or without audio, and particularly for "interactively" viewing photos, it's much more natural than a laptop. If you've ever used a battery-powered digital photo frame and passed it around, it's the same principle. Laptops, due to their two-piece hinged design just seem awkward in comparison.

Can it replace a laptop?

This entirely depends on what you use your laptop for! If you primarily work at a desktop PC, and take a laptop travelling purely to check and send the occasional email, then the answer is yes. If you frequently download photos from cards, process them in Bridge, or run Windows or MacOSX software, then you'll need both devices for now.