In 1999, IBM launched the first generation 1-inch Microdrive with storage capacities of 170 MB and 340 MB. The physical dimensions of Microdrive were 1.65" x 1.42" x 0.197" (42.0 mm x 36.0 mm x 5.0 mm) and conformed to CompactFlash Type II card standard. A second generation of Microdrive was announced by IBM in 2000 with increased capacities at 512 MB and 1 GB. Following the merger of IBM and Hitachi HDD business units, Hitachi Global Storage Technologies continued the development and marketing of the Microdrive. In 2003, 2 GB and 4 GB models were announced by Hitachi, followed by 6 GB capacity model in 2005.

In 2004, Seagate launched 2.5 and 5 GB models, and referred to them as either 1-inch hard drives or CompactFlash hard drives due to the trademark issue. These drives were also commonly known as the Seagate ST1. In 2005 Seagate launched an 8 GB model. Seagate also sold a standalone consumer product based on these drives with a product known as the Pocket Hard Drive. These devices came in the shape of a hockey puck with an integrated USB 2.0 cable. 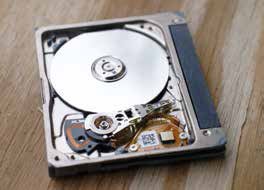 In 2003-07-16, a Chinese manufacturer called GS Magicstor, Inc. (subsidiary of GS Magic, Inc.) announced it had produced 1-inch hard disk drive with capacity of 2.4GB at the beginning of the year 2003, originally marketed as an alternative to Microdrive by Hitachi Global Storage Technologies. It was to be followed by 2.2 and 4.8GB 1-inch HDDs that were unveiled at the 2004 International CES, with 0.8-inch HDD. In 2004, Hitachi Global Storage Technologies announced it had filed a lawsuit against GS Magicstor Inc, GS Magic Inc, and Riospring Inc for infringement of multiple Hitachi GST's patents relating to hard disk drives, after GS Magic Inc had started promoting mini-HDD (small form factor hard disk drive).

As of July 2012, no manufacturers were making Microdrives, although we did find some on Amazon. They were and are, by any standards, exquisite pieces of engineering.


Please Note:
There is more than one page for this Article.
You are currently on page 5 Contact Mike McNamee


There are 196 days to get ready for The Societies of Photographers Convention and Trade Show at The Novotel London West, Hammersmith ...
which starts on Wednesday 20th January 2021