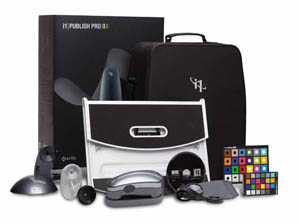 In the first serious revision since Gretagmacbeth and X-Rite joined forces, X-Rite recently launched new profiling software as a suite of options under the i1 umbrella. The suite consists of four basic sets: i1 Basic Pro, i1 Photo Pro, i1 Publish Pro and finally i1 Publish. There are upgrade routes from previous versions of Gretag i1 and X-Rite Monaco profiler. The software is compatible with the following spectrophotometers: i1 Pro, i1 iO and i1 Isis. ColorMunki and i1 Display software are retained also.

This is the first major change on the profiling scene for many years and is an amalgamation of the 'best' features of previous i1 and Monaco software. Depending upon the variant, you can profile cameras, projectors, monitors, laptops, RGB printers and a number of CMYK printer options.

Claims have been made that a better colour management engine within the new software provides better profiles, that is smoother gradation and more accurate reproduction. The interface has also been simplified such that the workflow is very easy to move through. We can vouch for the latter, the accuracy claim is more difficult to pin down. With software as comprehensive as this it is going to take a little longer than normal to tease out the subtleties and so we are concentrating on the basic printer profiling for this issue with more to follow.

In terms of testing profile-building, the basic premise is simple: you send the printer a known set of swatch values and then measure what comes out at the other end. Such is the accuracy required to differentiate quality profile-building results that quite extensive statistics are required. A better profile will deliver a more accurate print: that is a smaller average error across the gamut, but it is also important that grey neutrality is accurately adhered to and that colour gradients are smooth. In addition, the results are influenced by instrument variability, printer variability, measurement conditions and print drying time - impeccable protocols must therefore be adhered to!

The availability of the 'Printer QA' module for i1 Publish made for an easy initial decision of test target. A choice is available between the America GRAcol IDEAlliance ISO 12647-7 target and the European Fogra-Ugra V3 target. Both are essentially the same gamut coverage, but with slightly different target values. More on this later.

The approach taken with i1 Publish is similar to that used with ColorMunki: you make and measure a target and then feed additional patches and data to refine (iterate) the profile. The profile editing function of Monaco Profiler Platinum has been discarded in favour of this 'easier' methodology. The additional patches may be provided via photographs (patch extraction), an increase in the target patch number or by the provision of specific pantone patches for the iteration to concentrate upon.

Making Profiles may be made for RGB printers (eg inkjets including those using multi ink sets) or for printers driven by RIPs and using CMYK or 'CMYK plus' ink sets (typically a four-colour press with additional pantone stations or Hexachrome inks.

The number of patches employed may be varied (in increments) from 400 up to 6,000. A 6,000 patch test is for heroes only, requiring 15 A4 sheets of paper and a lot of measurement time. Experience teaches us that 400 patches will produce a good profile; around 800 is a sensible balance between time and accuracy and that more than 2,000 is probably wasting your time. We used 727 as being the closest to our routine number of 729 off Monaco Profiler Platinum. The patches may be scrambled to improve the spread of data.*

*For the non-specialist an explanation may be required. As the inkjet head passes across the page it puts down half the inks on the first pass and the remaining half on the way back (with High Speed ON) or on the next pass (High Speed OFF). This means that patches in different parts of the page receive different ink applications, some having a longer dwell between successive colours arriving. Also, a profile made with a target on one part of a large piece of paper will have a slightly different result to that made from a target in the middle or on the other side of the roll. Scrambling patches, or the more sophisticated averaging of several targets, attempts to reduce these variations.