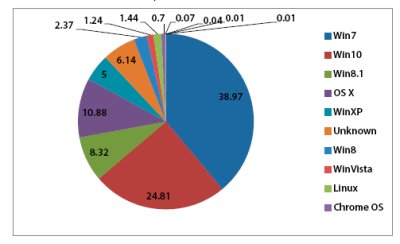 A decade ago the subject of computer specifications cropped up at all Photoshop seminars when question time came around. It was possible, back then, to make serious purchasing mistakes and end up with a system which was dogged by poor, sluggish performance. We were still labouring under the yoke of Windows Vista, the best promotional tool that Apple Mac has ever had! Then came Windows 7 which was (eventually) everything that Vista should have been (launched October 2009). Windows 7 is very much alive today still occupying the 'most popular' slot of all desktop machines.

In terms of operating systems, Android tops the bill but if the data are filtered to show only desktop OSs then the pie chart is as shown. Windows 7 currently leads Windows 10, but convergence is predicted by the data in about five month's time. Windows 8 never really gained much of a foothold and presently resides at a similar level to Mac OS.

The data show just how important the hand held device has become to modern life and in terms of OS installation numbers they are out of sight! Desktop systems, though, are still very important to professional photography practice and a good chunk of the 11% of Mac installs are used for graphics and media applications. Nobody really wants to be spending their day tapping out stuff on an iPad or even a laptop and, especially for photography, the small screens produce a far too flattering view of what an image looks like. So much in fact that we heard of an approach by somebody wielding an iPhone, along with a request to print a wall-size image (the whole wall that is) because it 'looked great' on their hand-held device!