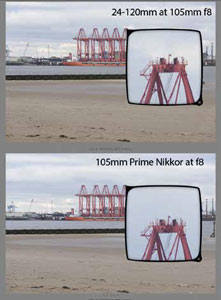 Lens Choices
The need to replace a couple of stolen lenses, along with the camera, led to some soul-searching. The lost lenses were the Nikkor 24-70mm f2.8 and the Samyang 24mm f3.5 TS. Neither was directly replaced. The Nikkor 24-70mm proved to be a superb lens for image resolution and drawing (distortion) but is very heavy, especially when climbing hills. It was also rather too heavy and bulky when carrying casually on holiday. Something more versatile was craved for. The Samyang was also excellent but was also bulky and even less versatile. The frequent need to use the shift lens at low camera heights to assist in dramatising the shot was proving difficult for your editor's limpy leg and, after recent surgery, near impossible!

So for all these reasons we ended up with the Nikkor 24-120mm f4 VR zoom. This is by no means a perfect lens and is not really considered a 'professional' lens for many purposes but has great versatility as a solo workhorse. Nikon also seem to think so as the lens is bundled as a 'kit' with the D810. Our own view is that the 24-120 can do as the 'take anywhere' and for more serious stuff prime lenses are sharper, lighter and of similar total cost. These decisions sometimes depend upon what lenses you already own. In our case the 14-24mm f2.8 zoom Nikkor had proved problematic. It was very heavy for carrying in the hills especially as the 24mm end was doubled up with the (then) 24-70mm and the 24mm Samyang. We considered the case for equipping the 14-24mm with a Big Stopper kit and then using it instead of the 24-120 for wide shots. The cost of the 150mm Big Stopper and the accessory holders is significant (see table) and the difference almost makes up the price of a prime 24mm along with a 100mm Lee system.

All of these sums can keep you entertained over a long winter's night as can pondering the slight fall in total cost of three primes versus a topclass zoom with a weight advantage as well! An additional point is that the resolution of the D810 is so high that a bit more cropping is available while retaining the ability to make reasonably sized prints. 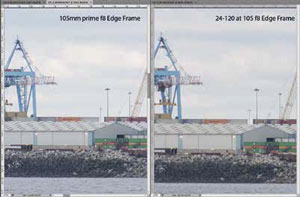 Lens Performance 24-120mm f4 Nikkor
After a couple of weeks testing the 24-120mm f4 we have decided that the lens does not really cut it as a professional optic for commercial photography. Too much plastic, way too much distortion, vignetting and softness at wide aperture are all condemning features. Having said that the lens is light, compact and versatile, and therefore ideal as a carry-everywhere lens. The pump action of the zoom is also a concern as this caused significant ingress of dust on the 24-85mm Nikkor of similar design that we once owned. We found the flimsy attachment of the lens hood a problem and shot with it cocked over by mistake in one test sequence, producing quite an ugly intrusion into the shot. By comparison the 24-70 came with a locking lens hood and very sturdy carry case - you get what you pay for! The 24-120 is also equipped with VR, this worked reasonably well but we never managed to get the improvement claimed in the advertising literature.

Some of the concerns listed above are moot for you cannot design a lens of this versatility without some compromises. Distortion can be eliminated in Camera Raw, lenses used wide open often benefit from some flattering softness and if you are to exploit the D810 to its potential then you'll need to be on a tripod anyway (and should usually find a way of getting a couple stops down at least). The higher residual chromatic aberration can also be removed in ACR. As far as we could tell, the penalty for using ACR distortion-correction was not detectable, whereas camera shake most certainly was!


Please Note:
There is more than one page for this Article.
You are currently on page 2 Contact Mike McNamee


There are 196 days to get ready for The Societies of Photographers Convention and Trade Show at The Novotel London West, Hammersmith ...
which starts on Wednesday 20th January 2021