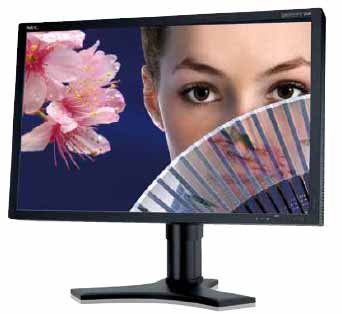 This is a new product and one that we saw for the first time at Focus on Imaging, as reported last issue. During our discussions on the stand at Focus we were sufficiently impressed to ask for a review model to be provided, so we could really give it the once over. The feature is, by its nature, long and involved. This is needed; it is a long involved subject about which we receive numerous phone calls for advice!

The 2690 is one of a trio of 'reference' grade monitors currently on offer from NEC. They are the 30-inch 3090, the 26-inch 2690 and (most recently announced) the 24-inch, 2490. The two larger models are billed as having H-IPS, the smaller has IPS (horizontal in-plane switching). All three have very wide viewing angles of 178° and claim gamut volumes of 107% of Adobe RGB colour space. All three come with detachable hoods and the excellent SpectraVision software for calibration (more on that later).

We tested the 2690 on our Professional Imagemaker workstation, a Windows Vista machine with two NVIDI Quadro FX 570 graphics cards, along with a number of other monitors we managed to gather together. The results were interesting and, at times, spectacular - read on! 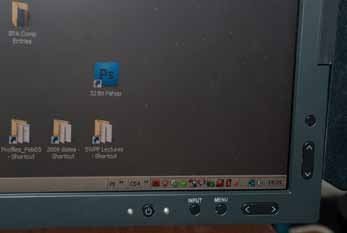 The monitor was delivered and set up by NEC; they were nervous about crazy journalists making a mess of the set-up and then not seeing the monitor at its full potential. As the story unfolded we began to see why this might be, but it had absolutely nothing to do with either the monitor or its software!

The first procedure was to reset the monitor to factory defaults by holding the 'input' button down during start-up of the monitor. We were warned to disable any other monitor colour management software and duly deleted Adobe Gamma, Monaco Profiler and a couple of GretagMacbeth programs from the start menu. Windows Vista correctly identified the monitor by name, which was a comforting start. There was some mystery about the Windows colour management initially, as the system did not recognise the profile being used. Photoshop was more savvy and recognised the monitor profile as soon as it was built. Such matters send your editor into a spiral of self doubt as you cannot be sure if things are working. This was well founded and a Vista rant will follow shortly.


There are 237 days to get ready for The Societies of Photographers Convention and Trade Show at The Novotel London West, Hammersmith ...
which starts on Wednesday 20th January 2021